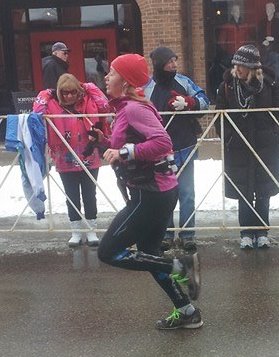 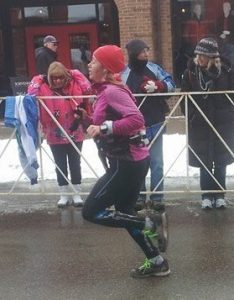 It was an unlikely day for a great race.  Temperatures were below seasonal, they had been all year.  Fresh snow was on the ground- nothing new about that though, this has been one of the snowiest winters I can remember.  And I wasn’t feeling 100% after getting a little carried away with basement demolition and re-aggravating my back and neck.   So I let go of all expectations and relaxed.  Decided I was just going to Burlington to run another long slow distance run.  You think that would make one feel happy, no race pressure, but I was bummed out.  Nate couldn’t run because he was sick and I was thinking what was the point of going all the way to Burlington just for a long run.  After all I wasn’t building to anything longer at this point.  I could have just run in Toronto.

The race started.  It could have been colder, it could have been windier.  So all things equal it wasn’t a great day to PB (Personal Best), but it wasn’t the worst day to race.  I started of calm and relaxed since I had tossed out all pressure to run a PB for this race, which was quite liberating.  My slightly audacious goal for this year is to PB in each of my running distances from 5k-marathon.  My current running race records are all more than 3-4 years old and I’d like to rectify that.  The completion of this goal depends on my ability to get lucky in the Chicago Marathon lottery, otherwise I’m not planning on running a marathon this year.

I tried to slow myself down, keeping pace between 5-5:10 min/km and I noticed around 8k that I was feeling really good and my splits were all below 5s.  So I made a decision to keep running sub 5 min/km and see if I could hang on.  The math for a sub 1:45 is easy (thankfully) so I knew if I just keep up this pace I could beat my 2009 1:44:55 that I got in Mississauga.   Hoping that I was running into the wind on the way out, I was sadly mistaken when I turned back West to find that the wind was still blowing on us.  Sometimes it’s easier to push into something to get you to run hard. (maybe)

The final 3k of any 1/2 marathon really test your dedication to pain.  I was able to push past my discomfort and the headwind.  I had taken 4 gels (1 15 mins before and 1 every 5 or 6 kms.  I had dropped a water bottle but at the time I was moving in a good rhythm so I didn’t stop to get it as there was still one more water station up ahead serving ice chips (previously water).

I crossed the line running hard and was totally exhausted but so very pleased with my performance (which is a very rare feeling for me).  I had take 50s off my previous PB and run a new record

While my run training this season has be bare bones, at 2 runs per week (long run and 1 other), including about 4-5 solid tempo runs, I met my goal of bettering my half marathon time.

Upon reflection and discussion with other runners, trainers, coaches it has been suggested that I could run a 1:39 half marathon.

If I could do this I’d be ecstatic.  I don’t have words.  It seems to fast.  I know the pace is achievable, but in some ways I still consider myself to be that 6 min/km runner that started running just 12 years ago.   So I’ll have to see what becomes of this projection.  My goal still stands to better all my run records, so right now, 1 down and 3 to go (5k, 10k, full).